What Did Homer See?

A University Lecture by James I. Porter, Irving G Stone Professor in Literature, Professor or Rhetoric and Classics, University of California Berkeley

The fates of Homer and of Troy’s destruction are intertwined: the one cannot be imagined without the other. Yet neither Homer nor Homeric Troy is likely to have existed. Even if they did, Homer was notoriously blind, which raises the question again, What did Homer see and know about the Trojan War? And why was he imagined to be blind? These problems troubled Homer’s readers from Aristotle and the Hellenistic grammarians to Schliemann and his successors, down to Borges (e.g. in “The Immortal”). The paper will examine this aspect of the Homeric Question by revisiting the manifold ancient biographical tradition about Homer (the Homeric Lives) through the filtering lens of Homer seen as a witness to a lost traumatic past and as himself a poet of catastrophe, a poet endowed, in other words, with no life but only an afterlife. My suggestion is that Homer is recording not a singular event in history but rather a singular inexplicability—an unaccountable loss with no known but only an imaginable origin— and that it is this convergence of factors that makes Homer, himself a singular inexplicability, so hauntingly present to us today. 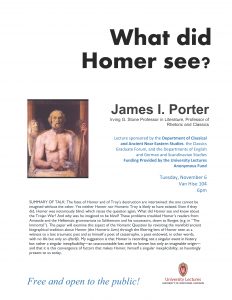