The Color of Law: A Forgotten History of How our Government Segregated America

Richard Rothstein is a research associate of the Economic Policy Institute and is a fellow of the Thurgood Marshall Institute of the NAACP Legal Defense Fund and of the Economic Policy Institute. He is also a former columnist for the New York Times. Rothstein’s lecture will focus on his recently published book, The Color of Law, in which he argues that dominant explanations for racial segregation which assume that de facto segregation—or informal practices, such as discriminatory lending practices—are flawed. Rather, Rothstein argues that de jure segregation in the form of explicit policies and laws are to blame for the segregation of African Americans from whites in American neighborhoods. Rothstein’s talk will be of interest to students and faculty interested in questions of race and ethnicity, inequality, and education. 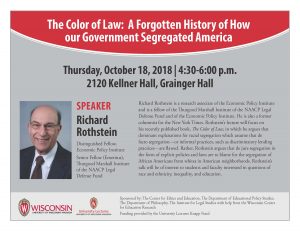 Center for Ethics and Education