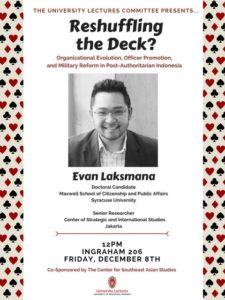 The process of reforming the Indonesian military is essential to the post-authoritarian democratic consolidation process. Since 1998, some reform policies (e.g. disbanding the dual-function doctrine) were successfully undertaken while others fell by the wayside (e.g. dismantling the territorial command structure). Recently under President Joko “Jokowi” Widodo, the military has been re-inserting itself into non-military duties. Its generals, meanwhile, have been exhibiting conservative and political tendencies while proposing antiquated notions of ‘state defense.’ Scholars have seized on these regressive behaviors as yet another sign of Indonesia’s growing ‘illiberal turn.’ Contrary to this argument, this presentation provides an organizational perspective of the military reform process. It focuses specifically personnel policies and how officers rise and rotate through the ranks. Drawing from dozens of organizational documents and a new empirical dataset of 1,863 senior officers, it demonstrates how officer promotional logjams—too  many officers but too few positions available—have taken place over the past decade with broad institutional and political ramifications. More broadly, the presentation will highlight the promises and pitfalls of relying on a ‘democratic liberal’ lens in understanding contemporary civil-military relations in Indonesia. 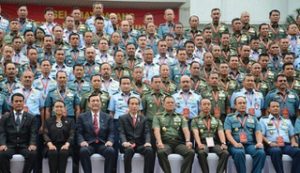