Join the Classics Society for its annual spring lecture by Professor Greg Aldrete, who organized and led the UW-Green Bay Linothorax project. He will present the ultimate result of the project’s endeavors: a fully reconstructed—and tested—set of ancient armor, just like the kind worn by Greek armies, including that of Alexander the Great.

Lecture Description: One of the most common forms of protection used by ancient Mediterranean warriors, including the armies of the Greeks and Alexander the Great, was the linothorax, a body armor made out of linen. Due to the perishable nature of its material, however, no examples have survived, and today it is poorly understood. Employing only the materials and techniques that would have been available to the ancient Greeks, the UWGB Linothorax Project reconstructed full size examples of the linothorax, and performed ballistic arrow tests to determine its protective qualities. This presentation will describe the project and its findings, as well as displaying a reconstructed linothorax and test samples.

Gregory S. Aldrete (Princeton B.A, 1988; Univ. of Michigan Ph.D., 1995) is the Frankenthal Professor of History and Humanities at the University of Wisconsin-Green Bay and the author of six books, many book chapters and articles, and five video lecture courses with the Teaching Company/Great Courses. He is a recipient of numerous awards for teaching and scholarship, including the American Philological Association Award for Excellence in Teaching at the College Level, the University of Wisconsin System Regents Award for Excellence in Teaching, and was named the 2012 Wisconsin Professor of the Year by the Carnegie Foundation and the Council for Advancement and Support of Education. He has won five NEH Fellowships, was a Solmsen Fellow at the Institute for Research in the Humanities in Madison, and was the Joukowsky National Lecturer for the Archaeological Institute of America. His books include: Floods of the Tiber in Ancient Rome; Gestures and Acclamations in Ancient Rome; Daily Life in the Roman City: Rome, Pompeii, and Ostia; The Long Shadow of Antiquity: What Have the Greeks and Romans Done for Us?” (with Alicia Aldrete); and Reconstructing Ancient Linen Body Armor: Unraveling the Linothorax Myster with Scott Bartell and Alicia Aldrete).

This lecture is presented by the Classics Society with support from the Department of Classical and Ancient Near Eastern Studies and the University Lectures General Fund. 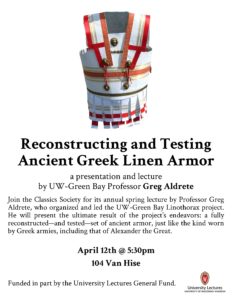