EuroTragedy: A Drama in Nine Acts

Ashoka Mody, a leading expert on international finance and financial crises, will discuss his recent book, EuroTragedy: A Drama in Nine Acts, on Wednesday, October 17 at Grainger Hall on the UW–Madison campus. Mody will give a keynote presentation at noon, followed by comments from La Follette School Professors Menzie Chinn and Mark Copelovitch.

Mody served at the World Bank and International Monetary Fund for nearly three decades. At the IMF, he was deputy director of both the European and Research Departments and was responsible for the design of Ireland’s financial rescue program during the Euro crisis. Earlier, at the World Bank, Mody worked on a range of developmental and financial projects and was principal author of the Global Development Finance Report of 2001.

Mody’s book offers a sweeping history of European monetary integration and the Euro crisis, highlighting how the push for a common currency – the Euro – has threatened the entire political project of European integration.

Mody is Charles and Marie Robertson Visiting Professor in International Economic Policy at Princeton’s Woodrow Wilson School. He previously worked at the World Bank, University of Pennsylvania, and AT&T’s Bell Laboratories and received his doctorate in economics from Boston University. 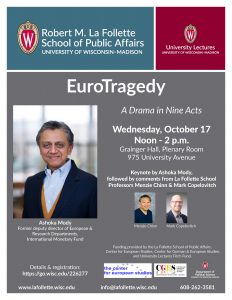