Whereas a categorical difference in the genitals has always been acknowledged, the question of how far these categories extend into human biology is still not resolved. Documented sex/gender differences in the brain are of-ten taken as support of a sexually dimorphic view of human brains (“female brain” or “male brain”). For this assumption to be accurate, differences be-tween females and males in the structure of specific brain regions should be both highly dimorphic in the population and internally consistent in the individual. It turns out that they are neither. Analysis of magnetic resonance images of over 1400 human brains reveals that internally consistent brains are rare. Rather, most brains are comprised of unique ‘mosaics’ of features, some more common in females compared to males, some more common in males compared to females, and some common in both females and males. A similar analysis of gender-related data (behaviors, personality characteristics, emotional and cognitive abilities, and attitudes) of over 5500 individuals reveals that internal consistency of gender characteristics is extremely rare. The lack of internal consistency in human brain and gender characteristics has important implications for scientific efforts to study the relations between sex and other systems as well as for social debates on long-standing issues such as the desirability of single-sex education and the meaning of sex/gender as a social category. 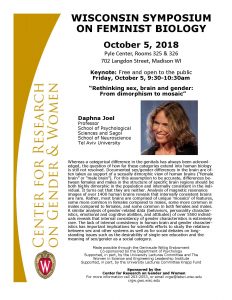