This paper examines collaborative storytelling in dinner table conversations between Japanese as Foreign Language learners and their Japanese host families. The goals of the study are to demonstrate i) how the activity of joint storytelling helps the participants develop new perspectives on each other’s cultural beliefs and ii) that co-telling is a dynamic process rather than a static phenomenon of perpetuating cultural stereotypes.

While there have been many studies looking at dinnertime talk in family settings, the phenomenon has not been extensively investigated between foreign language learners and their host families (e.g., DuFon & Churchill 2006). Iino’s study (1996, 2006), which examined dinnertime talk between JFL learners and their host families, finds that many topics discussed at dinnertime emphasize the uniqueness of Japanese culture, but his claim is based on the topic selection rather than the process of storytelling.

The present study re-examines Iino’s claim and demonstrates how the dynamic process of co-telling rewrites versions of the participants’ folk beliefs about Japanese and American cultures. The data come from 22 hours of videotaped dinner table conversations of 7 JFL learners and their Japanese host families, who reside in Tokyo. Microanalysis of the data finds that cultural folk beliefs are initially presented by the Japanese host family members, and challenged by the JFL learner. In this process, a new version is jointly co-created. This study suggests that multiple versions of cultural beliefs interpreted and reinterpreted in the co-telling help develop metacognitive awareness of each other’s cultural knowledge. 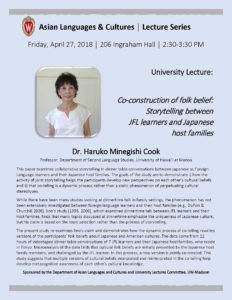