Analogy and Language in Relational Learning 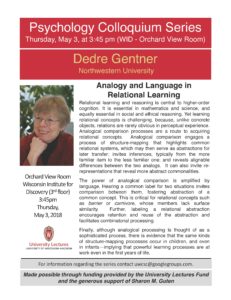 Relational learning and reasoning is central to higher-order cognition. It is essential in mathematics and science, and equally essential in social and ethical reasoning. Yet learning relational concepts is challenging, because, unlike concrete objects, relations are rarely obvious in perceptual experience. Analogical comparison processes are a route to acquiring relational concepts. Analogical comparison engages a process of structure-mapping that highlights common relational systems, which may then serve as abstractions for later transfer; invites inferences, typically from the more familiar item to the less familiar one; and reveals alignable differences between the two analogs. It can also invite re-representations that reveal more abstract commonalities.

The power of analogical comparison is amplified by language. Hearing a common label for two situations invites comparison between them, fostering abstraction of a common concept. This is critical for relational concepts such as barrier or carnivore, whose members lack surface similarity. Further, labeling a relational abstraction encourages retention and reuse of the abstraction and facilitates combinatorial processing.

Finally, although analogical processing is thought of as a sophisticated process, there is evidence that the same kinds of structure-mapping processes occur in children, and even in infants—implying that powerful learning processes are at work even in the first years of life.